My friends and their Vera - Amber 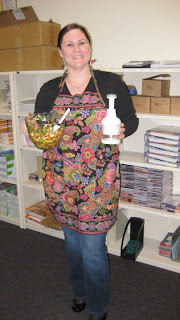 Most of my friends thought that my Vera bags were a little crazy or bold when they saw me carrying them. But some of them have had a change of heart and even carry them now! Amber was with me when we visited the signature store in Hawaii and even though she didn’t buy anything it caught her eye. She had mentioned that she liked the Puccini print, so for her birthday I bought her a Curling Iron Cover in that print. By the way, Curling Iron Covers make great gifts.

Well it only took one and Amber was hooked. Her first purchase she made herself was Zip ID Case in Night Owl. Since then she has purchased a Zip ID Case and Laptop Portfolio in Pirouette.

About a month ago Amber called because she had just signed up to sell Pampered Chef and she was looking for a VB apron to wear to her parties. We had seen them at the Sacramento signature store back in December. I happened to be on my way from the LA Kings hockey game to the signature store in Glendale. So I told her I would see if they had any there. In the mean time I called a couple of stores in San Diego that I have purchased VB from and she called ALL the stores in Sacramento to see if they had one. No one had any aprons. When I got to the signature store in Glendale they said that they had been out since they had put them on clearance in December. They will come out with aprons again for Mother’s Day. Amber couldn’t wait that long, but was able to find one on ebay.

Amber was just at the Sacramento signature store about a week ago and picked up a couple more VB items. She took her coworker Melissa with her. Melissa had never been before and she ended up buying a Curling Iron Cover. (See I told you it was a good first item!) The woman at the store even gave them each a free Card Holder since Amber recruited a new VB fan!

And since Amber let me blog about her I am going to include a link to her Pampered Chef page. Happy cooking! http://www.pamperedchef.biz/amberf
Posted by Alison @ OhMyVera! at 7:04 AM