Sorry that I didnt get a chance to blog yesterday. My Mom and I flew back from Sacramento and we were supposed to land in San Diego at 9:30pm, but there was too much fog in San Diego so we were diverted to Ontario, where we sat on the plane waiting to the fog to clear. After midnight they decided to put us on busses to get us back to San Diego. We got home around 2:30 in the morning and then had to take a cab home. It was a long night, so I slept in until 10am yesterday and went to bed by 8pm. At least we got home safe!

I had a great time in Sacramento, we had so much going on. I went to my cousin's wedding on Saturday and on Sunday I went to my friend Sophia's baby shower. My friend Amber and I went in together to get Sophia a Vera Bradley Baby Bag! We originally purchased a Sittin' in a Tree Baby Bag because Sophia's favorite color is green, but when Baroque was released we knew she would love it, so we exchanged it. 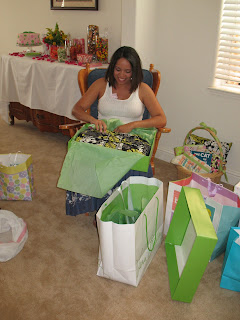 Sophia opening her her new bag! We are so glad that she likes it! 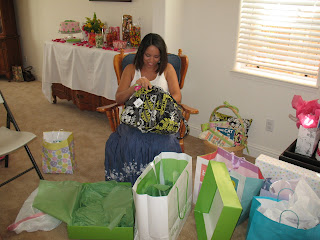 I was in charge of folding up gift bags and packing up all of the gifts for Sophia to take home. When she started to open our present I pretty much leaped in front of her so that I could take a photo.