Another Vera Bradley Find on Craigslist

I had another great find on craigslist! I found a Windsor Navy Hipster that looks like it could be new. She must have only used it a few times. You will never guess how much I paid for it! Only $5! 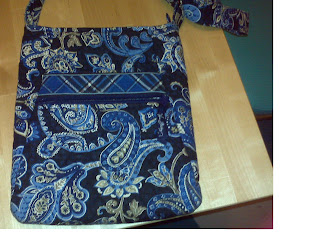 I saw the listing last week, but I was so busy I didnt email him (a guy was selling it for his fiance) but at the end of the week I decided to go ahead and see if it was still available. It was! So I went last night to pick it up. When I called to say I was there, he didnt answer. So I called again, still no answer. So I was off to Ikea which was just down the street to help my friend pick up a few things for her newhouse. Of course he called back when I was pulling into the parking lot to say that he left the phone in the other room. So after I helped Joyce at Ikea it was back to try to pick up the bag and this time he answered!
I am not a huge Windsor Navy fan, so I think that I will probably just end up reselling this bag. I am going to try to sell my decluttering bags this week...it might have to wait until the weekend though.
Posted by Alison @ OhMyVera! at 7:19 AM