How far would you go for Vera? 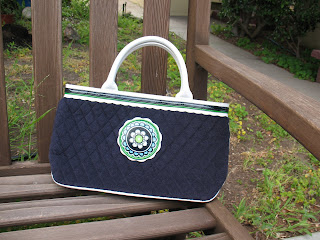 I have been checking craigslist for Vera bags and this time only in San Diego. No more checking in San Fran or Sacramento. It has been a while since I have seen anything that I was really interested in and had a good price, but last week I came across a great posting! It was for the small Terry Tote/Purse. I forget what it’s exact name is and it isn’t on the website anymore. And it was only $15! So I emailed the lady who posted it and she called me in less than an hour and said that I could have it, but that she was in Carlsbad. Carlsbad is about 45 minutes north of San Diego, but I was willing do drive that far. I told her that I probably wouldn’t have time to get up there until Sunday and she said that was fine. So on my way to my parents house for Mother’s Day I stopped in Carlsbad. The purse is like new! I doubt she ever used it. It even had that little packet that is supposed to absorb moisture.
Since it was only $15 the 45 minute drive seemed worth it! How far would you go for Vera?
Posted by Alison @ OhMyVera! at 9:05 AM